For the first time since 1999, Spain will have only one representative in the Champions League knockout stages.

It's fair to say LaLiga's reputation took a battering last week as three of its four representatives were eliminated from the Champions League with a match still to be played in the group stage.

What made this scenario even uglier for Spanish football is that none of it was even that surprising.

Barcelona's elimination before they'd even played was the headline-grabber, but Atletico Madrid and Sevilla both had their fates sealed as well, albeit in rather different circumstances.

Sevilla won 3-0 at home to Copenhagen, though the score flattered them greatly, while Atletico drew 2-2 with Bayer Leverkusen, Yannick Carrasco seeing a last-gasp penalty saved before Saul Niguez headed the rebound against the crossbar and a follow-up effort was blocked on the line by Carrasco.

Last week's woes mean that for the first time since the Champions League expanded to 32 teams in 1999, there will only be one Spanish side in the knockout stages – Real Madrid.

But given LaLiga's decline, that might become the norm before long. 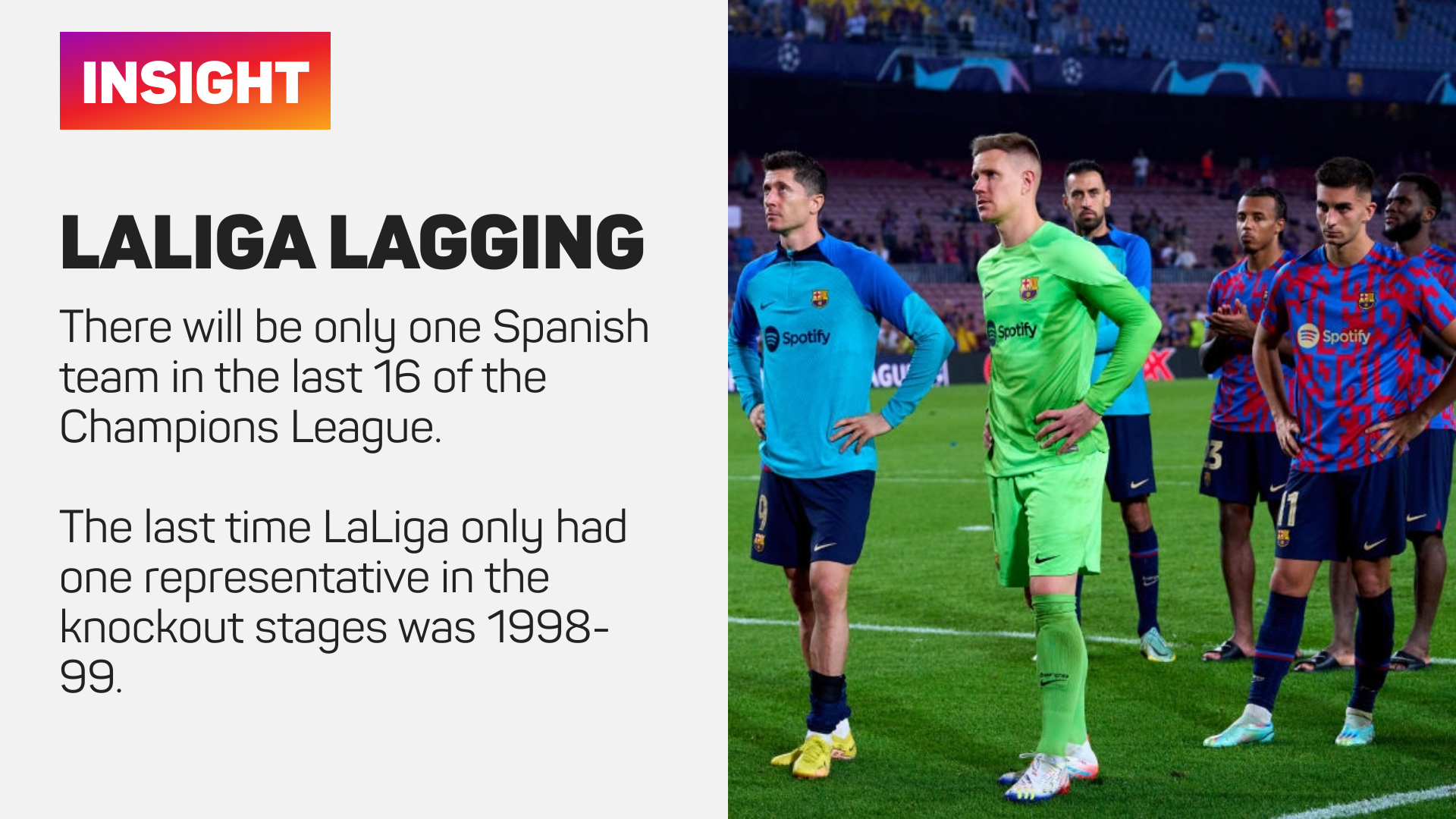 Barcelona and Sevilla can at least point to having particularly difficult groups.

Most would still have expected Barca to at least get in the top two, but Bayern Munich and Inter were always likely to be problematic, and so it proved. As for Sevilla, realistically the best they could've hoped for was second behind Manchester City, but Borussia Dortmund's starting XI simply boasts far more quality than the Andalusians'.

And then there's Atletico. Alongside Club Brugge, Porto and Bayer Leverkusen, Diego Simeone's side would've been most people's favourites, and yet they head into matchday four with the possibility of finishing bottom.

They also go into Tuesday's trip to Porto winless in their past four Champions League games, their worst run since going nine without a win between December 2008 and December 2009.

That, of course, makes it their worst such run in the competition under Simeone, although Barca can beat that in the 'woes' stakes as they fail to get out of the group for the second year in a row.

Before last season, Barca got to at least the last 16 for 19 campaigns in succession, and if they lose away to Viktoria Plzen on Tuesday, it'll be the first time they've lost four consecutive Champions League away games since October 1997. 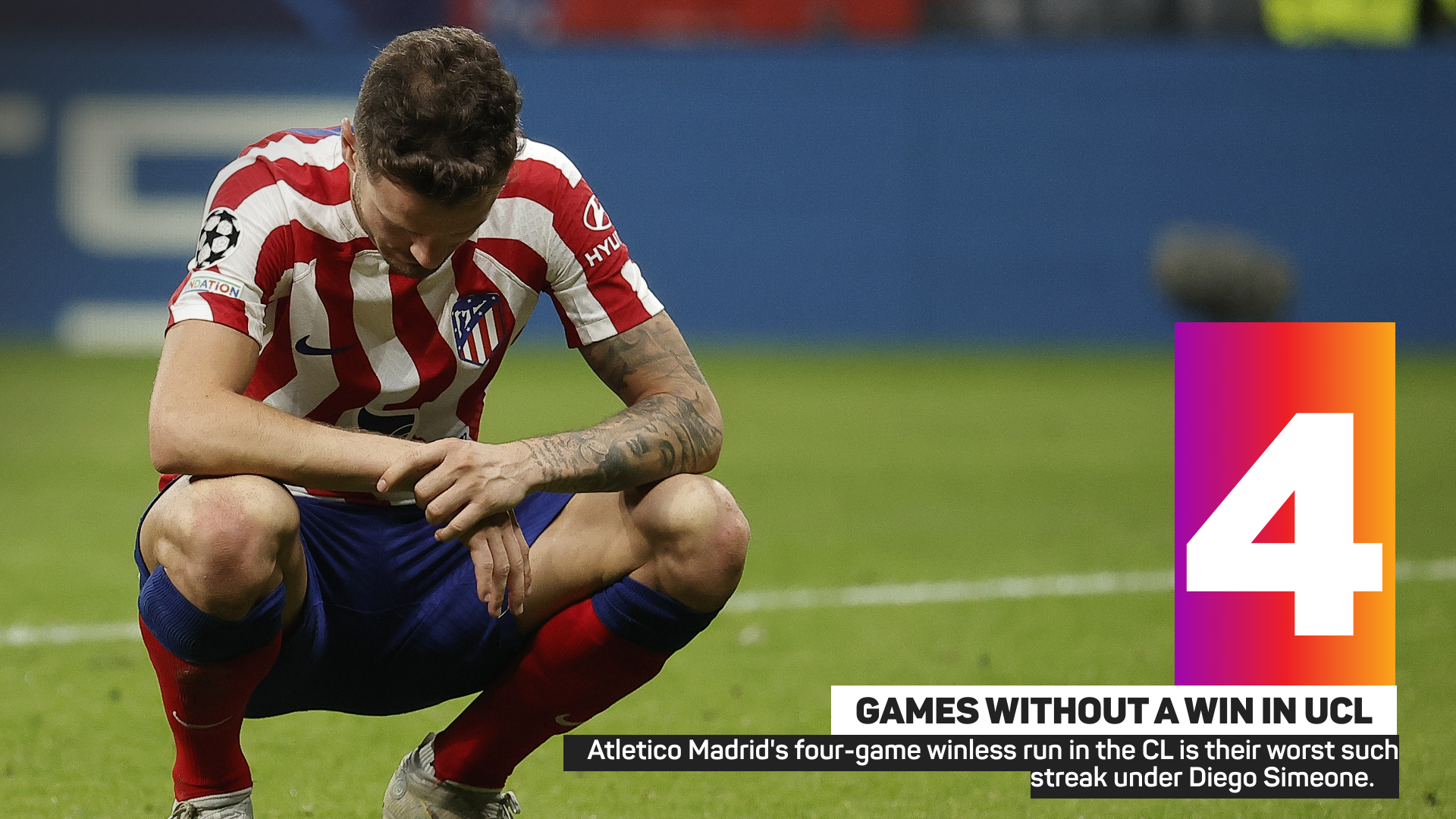 The fall from grace

It wasn't so long ago that LaLiga was at worst considered the main 'rival' – if leagues can have rivals – of the Premier League. It had superstars, El Clasico, teams winning at various levels in Europe and there was a brand of football widely associated with the competition.

LaLiga still has its draws, and let's not forget we've seen Spanish teams win the Champions League and Europa League in the past 18 months, but the Premier League is now undoubtedly world football's biggest domestic league in virtually every way.

This has more or less become the case through money, something many LaLiga clubs do not have much of.

For example, last season in the Premier League, Sporting Intelligence estimated only Norwich City received less than £100million (€116.1m) across prize money and TV revenue. Even then, Norwich raked in £98.6m (€114.5m), and £79m (€91.7m) of that was the equal share every club gets.

Napoli face Liverpool next...
How many group stage goals will they finish with?#UCL pic.twitter.com/inTvrbGu3Z

In football, few issues can be completely separated from money, but there's an argument Spanish football has suffered from a lack of evolution.

Similarly, the competition can boast a range of different playing styles and philosophies. Again, it would be unfair to say this is exclusive to the Premier League, but the point is there are signs of evolution everywhere in English football when it might once have been seen as somewhat insular.

Barcelona's ingrained principles make it pretty difficult for them to alter course; stylistically, Atletico have hardly changed at all through Simeone's tenure; and Sevilla work with the same buy-to-sell model as they have for 20 years, while on the pitch they're currently paying the price for failing to adapt to key defensive losses and signing too many ageing players over the past three years.

Of those three and Madrid, Los Blancos are probably the only ones you could say have evolved with the times, with Zinedine Zidane and Carlo Ancelotti both valuing approaches regarded more pragmatic than perhaps the club is known for.

Nevertheless, there's a perception LaLiga football is slow, and this certainly doesn't help the idea the Spanish game has struggled to modernise. It considers itself a greater financial power than the German Bundesliga, and yet, in eight Champions League meetings between teams from those countries this term, Spain has one win to Germany's five. 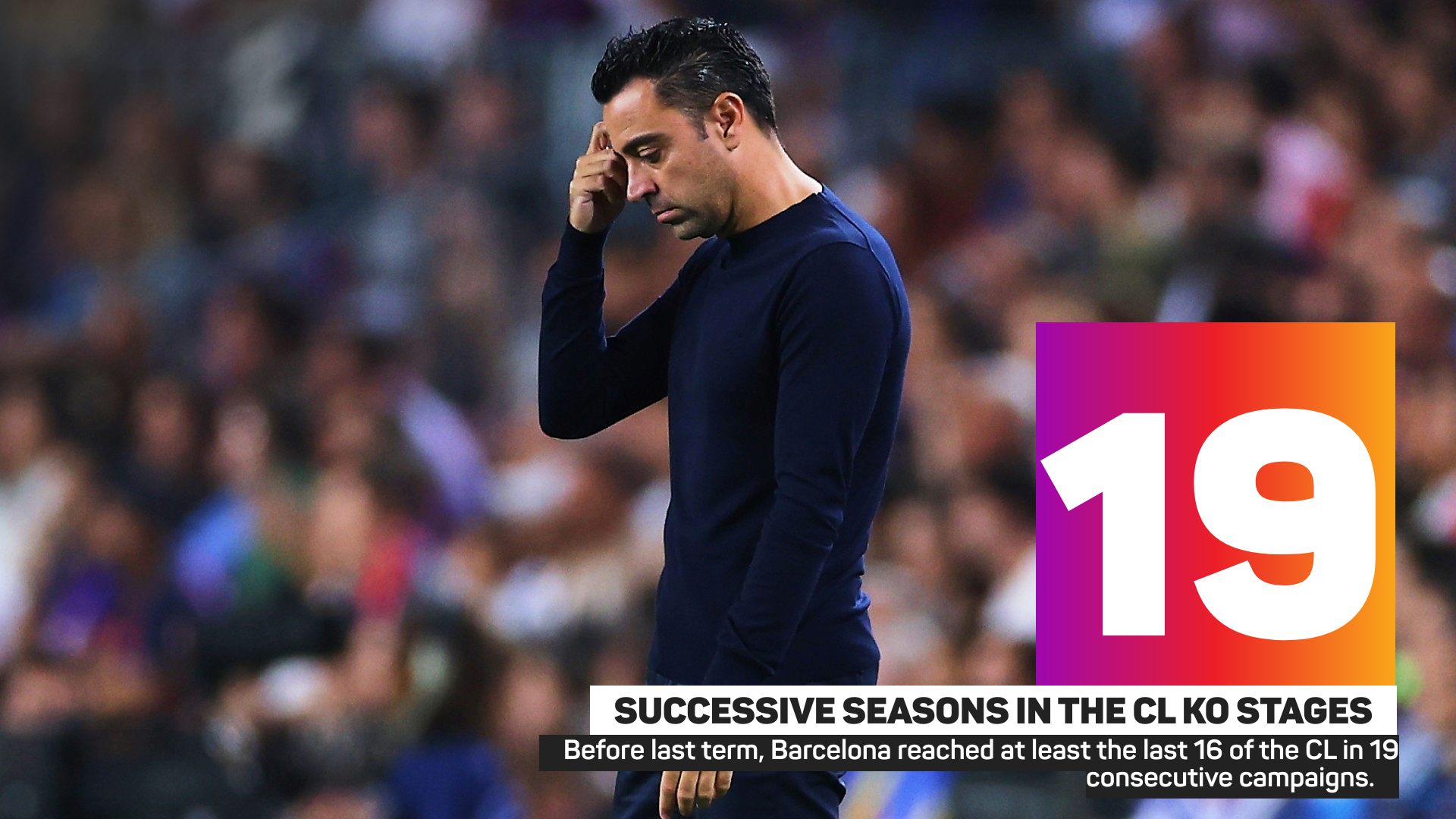 Too little, too late?

Coaching remains a high standard in Spain, and that's highlighted by the technical qualities of the players, but with money at a premium compared to the biggest clubs and the Premier League, the best managers and players soon move on.

Evolution is difficult: you're just hoping your team lands on the perfect combination of coach and sporting director, but after one or two – if you're lucky – good seasons, one is lured away and the cycle starts again.

That may be a simplistic way of looking at it, granted, but it's difficult to shake the notion LaLiga is paying the price for its own lack of vision.

In 2015, a new TV money distribution agreement came into effect, with 50 per cent of all revenue being shared equally among all clubs. It was much needed but arguably too late.

LaLiga had the world's best players for over a decade, but much of the money from that era just went into the pockets of the big two rather than to improving the league's infrastructure or commercial clout.

However, the new TV money distribution deal was a big win for LaLiga as a whole, and the league's crackdown on financial irregularities also stands to help the competition build a sustainable future.

In that regard, the future could be quite bright for LaLiga. But will it ever be the same again? Due to the might of the Premier League, probably not.

Portugal were in sensational form without Cristiano Ronaldo against Switzerland, but Xherdan Shaqiri criticised the losing side's display.

Cristiano Ronaldo was dropped for Portugal's big win over Switzerland, but Goncalo Ramos is not sure to start against Morocco.

Bruno on benched Ronaldo: 'Do you think Cristiano would be happy?'

Cristiano Ronaldo had to settle for a place on the bench against Switzerland, and Bruno Fernandes did not pretend he was happy about it.

Ronaldo risks 'scruffy end' to career after being dropped by Portugal, says Neville

Portugal dropped Cristiano Ronaldo for Tuesday's World Cup demolition of Switzerland, which teed up a quarter-final against Morocco.

Cummins ruled out of second Test, Boland to play, Smith to skipper

Pat Cummins was unable to prove his fitness for the day-night Test starting on Thursday, with Ashes sensation Scott Boland coming in.

Anthony Davis on Sunday became the first Laker with back-to-back 40-point games since Kobe Bryant in 2013, but exited early on Tuesday.

The second overall pick in the 2020 NBA Draft is set to return to the NBA, with Golden State missing three key players.

Though everyone is fighting for an NBA championship, the league has created another award to hand out as of this season.