Bayern Munich are overwhelming favourites for another Bundesliga title, but it could be a difficult season for Greuther Furth.

Bayern Munich are entering a new era under Julian Nagelsmann, but it looks unlikely much will change when it comes to their dominance of the Bundesliga in 2021-22.

It could be another good season for Wolfsburg, but things are not looking too good for Greuther Furth, according to Stats Perform predictions.

The Stats Perform League Prediction Model, created by Stats Perform AI using Opta data, has analysed the division ahead of the new season to assign percentages to potential outcomes for each club.

The model estimates the probability of each match outcome (win, draw or loss) based on teams' attacking and defensive qualities, which considers four years' worth of results, with weighting based on recency and the quality of opposition. The season is then simulated 10,000 times to calculate the likelihood of each outcome.

Let's see what we can (likely) expect from the new Bundesliga season... 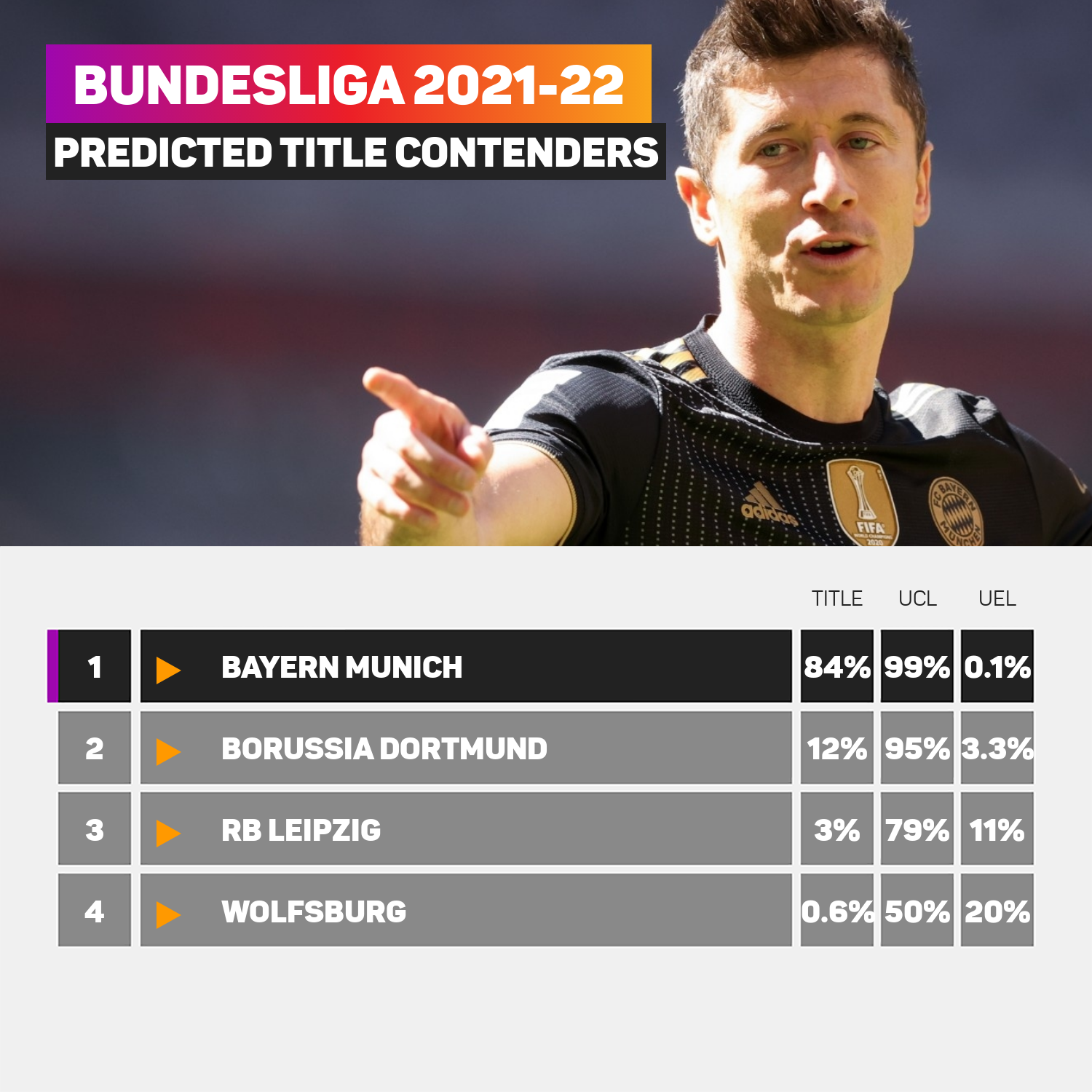 It looks like Nagelsmann's first season at the Allianz Arena is set to be a positive one. The predictor model gives Bayern a huge 84.3 per cent chance of winning the title for the 10th time in a row.

With the loss of David Alaba mitigated by the signing of Dayot Upamecano, there is little reason to doubt Bayern's credentials even as their new coach gets to grip with the job. Indeed, they are given just a 0.1 per cent chance of failing to qualify for the Champions League, while the likelihood of relegation stands at a big, fat zero.

Borussia Dortmund might have lost Jadon Sancho but they are still expected to be Bayern's biggest challengers, the Stats Perform model giving them an 11.7 per cent chance of a first title since 2012. RB Leipzig, third last term, have just a 2.9 per cent chance of finishing first, while Wolfsburg are fourth-favourites at a lowly 0.6 per cent. At least their chances of a Champions League spot stand at a strong 49.6 per cent.

Last term's top four look likely to repeat their league positions, but don't discount Eintracht Frankfurt from a surprise Champions League place – they're given a 30.8 per cent chance of qualifying for Europe's top tournament.

Similarly, Bayer Leverkusen have just under a one-in-four chance of a top-four spot, with Borussia Monchengladbach at 14.7 per cent – slightly above their likelihood of a Europa League place. 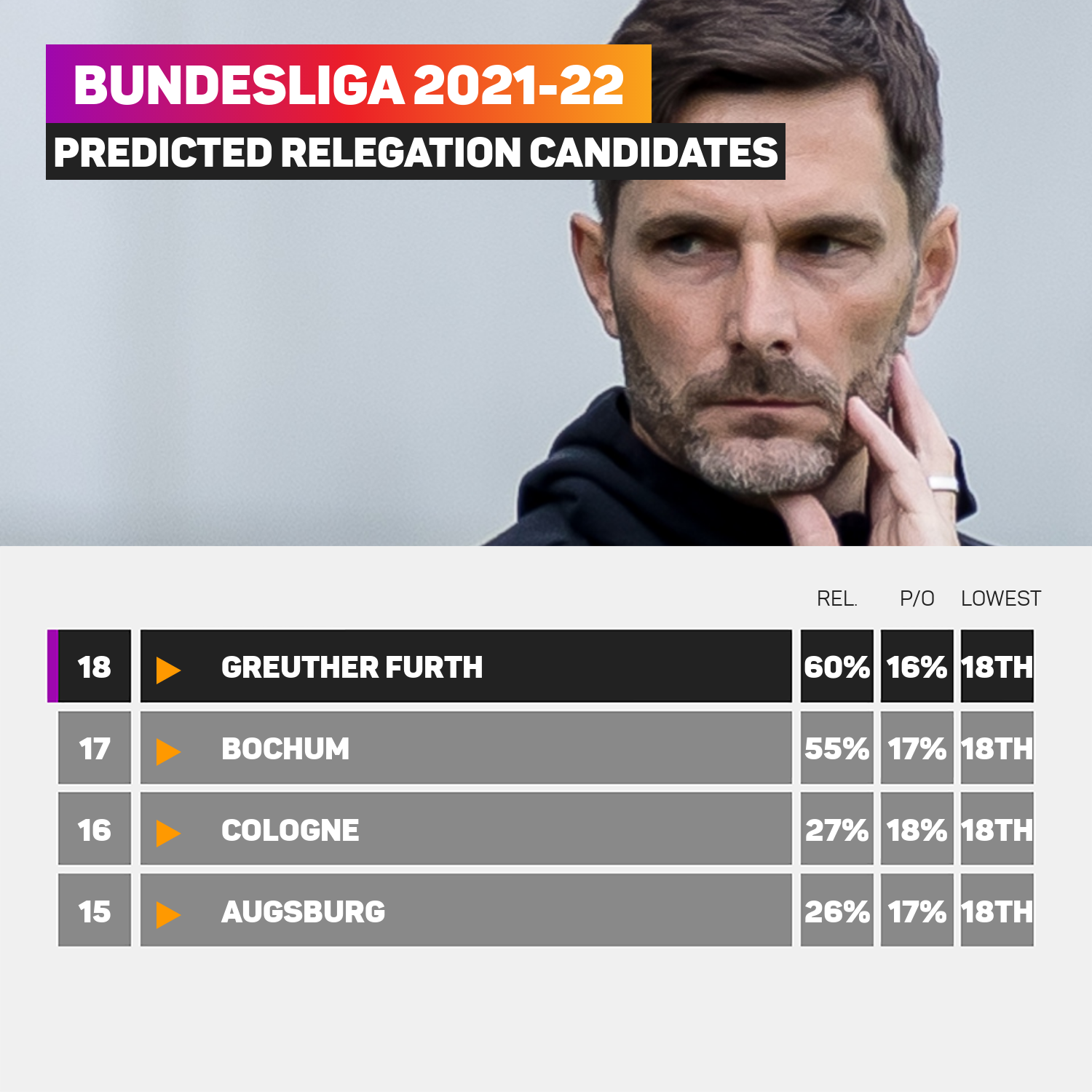 BOCHUM OF THE PILE

Bochum won the second-tier title last term to return to the Bundesliga for the first time in 11 years. Their stay is not expected to be a long one, however: the Stats Perform model gives them a 54.8 per cent chance of being relegated in 2021-22.

Still, it could be worse. Greuther Furth are the favourites for the drop at 59.7 per cent, with a 15.8 per cent of finishing the season in the relegation play-off spot.

Cologne (27 per cent) and Augsburg (25.8 per cent) are the other favourites for the drop, while all four sides are given 18th out of 18 as their lowest probable finish.

Arminia Bielefeld fans should not feel too comfortable, either, given their side have a 19 per cent chance of going down.

Nuno backs Kane, insists goalless league start about the team not one player

Defenders Marcos Alonso and Joel Matip have had more touches inside the box this season than Harry Kane leading to criticism.

Chances were few and far between in the first leg of the all-Brazilian Copa Libertadores semi-final with only one shot on target.

As Mitch Langerak continues to flourish in Japan, Stats Perform looks at the numbers behind the Nagoya Grampus star using Opta data.

Milan goalkeeper Mike Maignan was allegedly the subject of racial abuse from Juventus fans on Sunday.

Simeone wants Griezmann patience: This Atletico side is different to the one he left

Antoine Griezmann is yet to score in four games since his return to Atletico Madrid, while Luis Suarez ended his lean run with a double.

Takumi Minamino did his hopes of more involvement in Liverpool's first team no harm with a double in the EFL Cup win at Norwich City.

The United States team includes eight of the current top 10 golfers in the world but Justin Thomas believes the Ryder Cup will be close.