Brazil delivered an impotent performance and were arguably fortunate to escape their final Copa America group game with a draw.

Neymar, a mask hanging from his left ear, took a bite from a bar and gestured this way and that. This was a game the world's most expensive player was happy to sit out, his unique talents probably better saved for another occasion.

Such as that which awaits Brazil on Friday, back at the Estadio Olimpico Nilton Santos in Rio de Janeiro, when Uruguay or Chile will be the opposition for Tite's team.

This Sunday showdown with Ecuador was one for La Tri to savour and the Selecao to get out of the way, perhaps learn a thing or two but ideally come through unscathed and with a thing or two for the head coach to mull over before the knockout stage begins.

So Ecuador made the most of their opportunity to face Brazil at just about their most meek, the 1-1 draw sending Gustavo Alfaro's team through to the Copa America quarter-finals and a likely clash with Argentina next.

Whoever Ecuador do come up against next, they will be back here at the Estadio Olimpico Pedro Ludovico in Goiania, where after holding the five-time World Cup winners to a deserved draw they had every reason to celebrate.

Ecuador are through to the Copa last eight for just the second time in the 21st century, and they were full value for their point as they finished above Venezuela and brought Brazil's 10-game winning streak – a record for Tite at the helm of the national team – to an end.

But what of Brazil? Tite made a raft of changes to ensure his hand will be as strong as possible for when the stiff competition begins, and it was hard to pick a promoted player who did his hopes of starting that quarter-final any good.

Certainly not Roberto Firmino, who started behind Gabriel Barbosa and played just 17 passes and had a mere 25 touches before being substituted midway through the second half. The Liverpool forward did not have a single goal attempt, and strikeforce spearhead Barbosa had only one, an early prod at a clever lobbed pass from Lucas Paqueta.

It fell to defender Eder Militao to show the Brazil attackers the route to goal, his neat header in the 37th minute opening the scoring.

Militao, Paqueta and Douglas Luiz danced away in a presumably rehearsed celebration, and you wondered if that was the kickstart this flat Brazil performance needed, the cue for a raising of their game.

Brazil were rocking in a shy way here though, enjoying 71.1 per cent of first-half possession but not looking in the mood for a kill.

Angelo Preciado saw a thumping shot deflect just over the bar early in the second half as Ecuador chased an equaliser, and Enner Valencia also went close with a low strike before Angel Mena lashed past Alisson to level up in the 53rd minute.

Mena became the second substitute to score for Ecuador at this year's Copa, after Gonzalo Plata. Only Brazil (four) have benefited from more goals via a substitute this tournament.

A clever headed pass by Valencia set up the chance for the equaliser as Brazil's defence nodded off, and Ecuador went on to dominate the half, even swinging the possession dial around in their favour. They had 50.8 per cent of the ball in the second 45 minutes, five goals attempts to Brazil's two. Sebas Mendez was a titan in midfield, albeit against semi-interested opposition, winning possession a game-high 10 times and finding his man with 48 of his 50 passes over the 90 minutes. 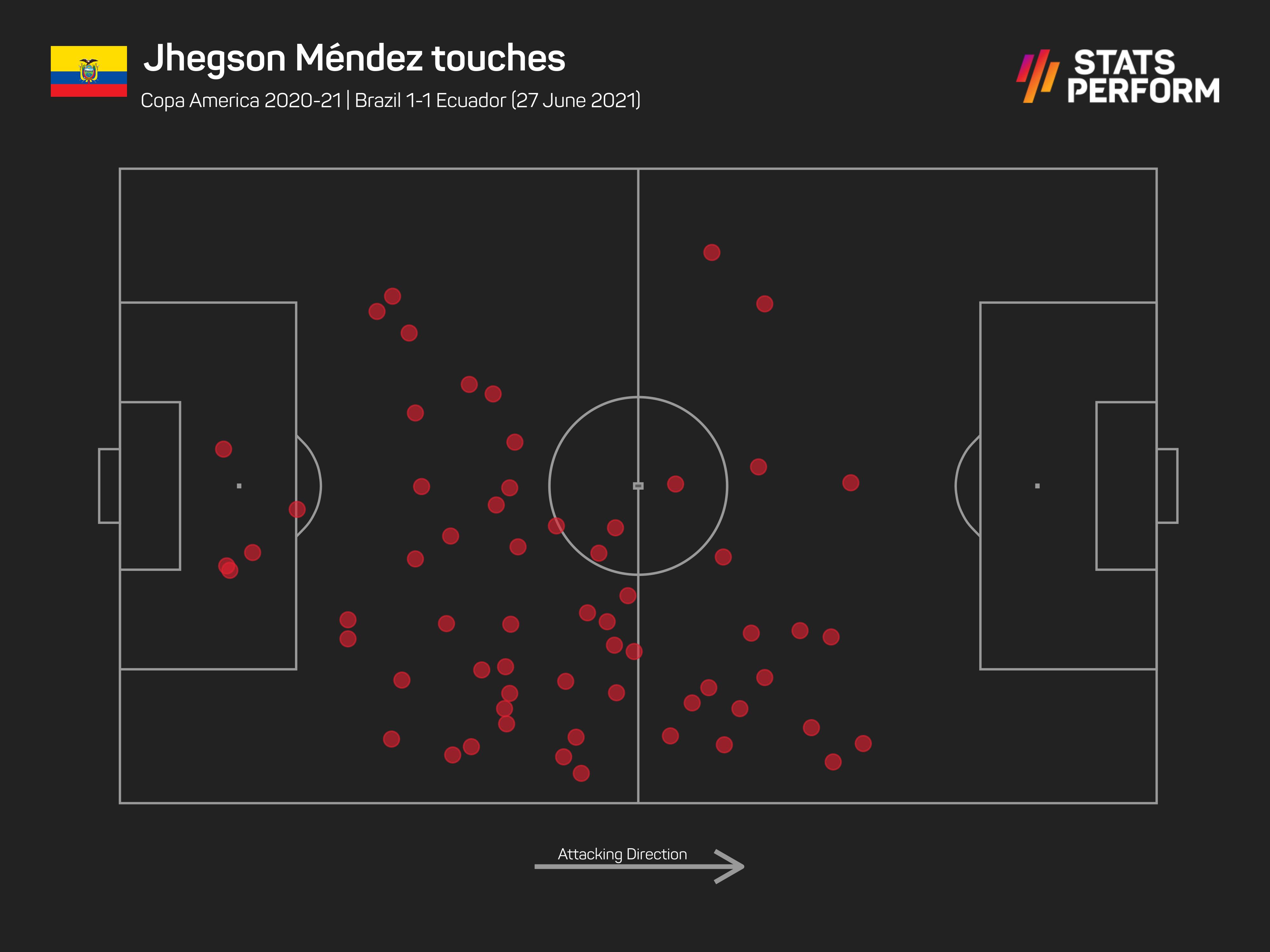 Valencia was denied by a brave defensive header from Militao, who got to Preciado's dangerous cross just ahead of the former West Ham striker, and Ecuador then wanted a penalty when the ball struck Everton on the arm.

Mena almost scored a stunning second for Ecuador when his free-kick from close to the right touchline was whipped in with audacious curl and dip, forcing Alisson to tip over his crossbar.

Richarlison and Vinicius Junior came on as Tite looked to spark Brazil to life, but there was to be no ignition. It was the first time the reigning Copa America champions had scored at least one goal at the CONMEBOL showpiece and did not win since the 2015 edition.

Brazil are unbeaten against Ecuador in their last 11 games now, and this result probably matters very little, given the wins over Colombia, Peru and Venezuela that preceded it.

Moreover, the theory that you are only as good as your last game hardly applies when you rest the likes of Gabriel Jesus, Thiago Silva, Casemiro and Fred.

Yet Neymar, as he took another gnaw at his touchline snack, might have wondered when a Brazil team had ever looked so passive as this side did after the interval.

Copa America 2021 winner Messi: I needed to achieve this with Argentina