Lucas Digne has fallen out of favour with Rafael Benitez and the full-back wishes to leave Everton amid mooted interest from Chelsea.

Left-back Digne, who signed from Barcelona for a reported £18million in August 2018, has not featured for the Toffees since a 4-1 home defeat to Merseyside rivals – and Benitez's former club – Liverpool on December 1.

That loss was one of eight for Everton from their last 12 Premier League games. They have won just one of their fixtures in that run, beating Arsenal 2-1 thanks to a late Demarai Gray stunner.

Everton, who were limited in the off-season transfer window partly due to the Premier League's profit and sustainability rules, have been active already this month, signing right-back Nathan Patterson from Rangers for a fee believed to be £11m plus add-ons, and bringing in left-back Vitaliy Mykolenko from Dynamo Kiev, seemingly to replace Digne.

Chelsea, who need cover at left wing-back following news of Ben Chilwell's season-long injury lay-off, are rumoured to be interested, while West Ham and Newcastle United have also been linked.

And, in a somewhat unexpected outburst during Friday's news conference to preview Everton's trip to Hull City in the FA Cup, Benitez revealed Digne, who signed a new long-term contract in 2021, wished to leave.

Benitez also addressed an Everton legend from the club's 1980s heyday in the form of Peter Reid, who on Sunday, after a 3-2 defeat to Brighton and Hove Albion, tweeted: "Major problems at Goodison Park, huge concerns about the direction of the football club."

The Spanish coach told reporters: "I want to ask a question to every fan, or former players, what Peter Reid will do or say if a player doesn't want to be there. That's it, simple.

"I had a couple of conversations with [Digne], he told me what he thought. What do you expect a manager to do? Fans, former players, what will Peter Reid say if a player goes to the manager that he doesn't want to be here?

"We need players that want to be here. Talking about individual stats when the team finished 10th [last season], it means nothing for me. I want a winning mentality, ambition, it will take some time."

Asked why he included Digne on the bench for Sunday's loss to Brighton, having dropped him altogether for previous matches, Benitez said: "I try to do what is best for the club, sometimes you pay for that."

Benitez also confirmed there had been no bids for Digne.

"I would like to sign [Erling] Haaland and [Kylian] Mbappe, but you'd need commitment. We don't have commitment yet," he said.

"There is interest but nothing concrete. What I cannot do is give priority to those who are not interested. Do we want to grow and improve or just manage egos?"

With Digne's replacement already through the door, the focus for Everton will be on recouping a suitable fee for such an experienced player in arguably his prime years.

Digne has undoubtedly been a success at Everton after having a tricky spell at Barca, where he struggled for regular minutes behind Jordi Alba in the pecking order.

Having replaced fan-favourite Leighton Baines as first choice at Everton, Digne went on to be a creative fulcrum under Marco Silva and Carlo Ancelotti, both from set-pieces and open play. 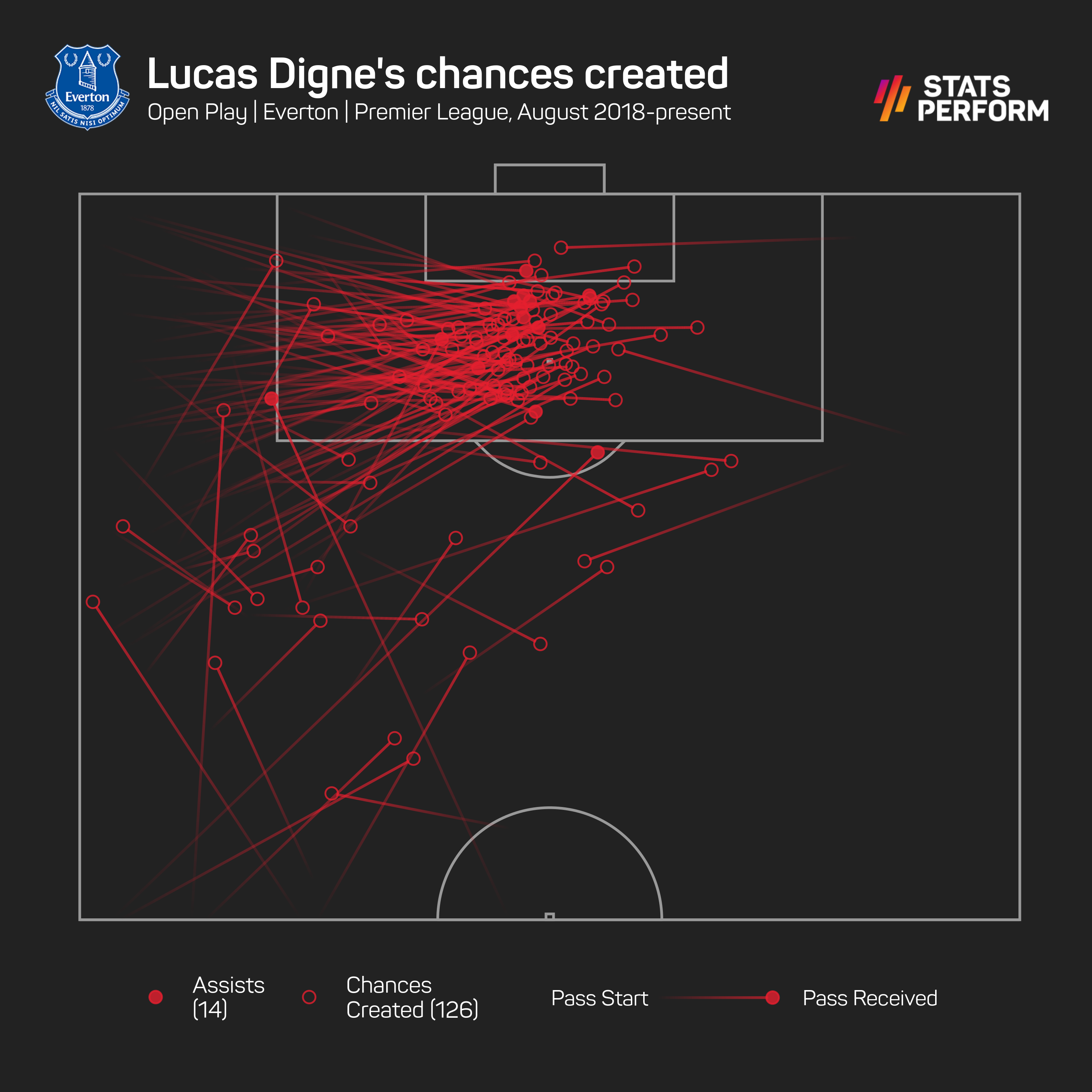 Since making his Everton debut on August 11, 2018, Digne has created 211 chances in the Premier League, ranking him behind only Liverpool star Trent Alexander-Arnold (267) among defenders.

Digne's 34 big chances created is the third most, behind Alexander-Arnold and Andrew Robertson, with his 18 league assists also only bettered by the Liverpool duo.

Alexander-Arnold (1,408) is also the only defender to have played more passes/crosses into the area than Digne (902), highlighting just how much of a persistent threat the Frenchman can be.

But on the defensive side of things, Digne has proven himself slightly more reliable in the tackle than Alexander-Arnold and Robertson, with the former Paris Saint-Germain full-back boasting a better success rate (63.2 per cent) than both in such situations.

That desire also translates to his duels involvement, with Aaron Wan-Bissaka and Charlie Taylor the only full-backs (minimum 50 games played) to have a better duel success rate than Digne's 59.4 (712/1,199) since the Everton man made his Premier League debut.

Frenkie de Jong and Pierre-Emerick Aubameyang have been linked with Barcelona exits amid their attempts to register new signings.

Inter are hoping Romelu Lukaku will again be able to fire them to the title alongside Lautaro Martinez after returning from Chelsea.

Former Brazil midfielder Willian said enough is enough after both he and members of his family were threatened by Corinthians fans.

Rahul Dravid will take a break before the Asia Cup, so VVS Laxman steps up to take India head coach duties in Zimbabwe.

Madrid ready to adapt if Asensio and Ceballos leave – Ancelotti

Marco Asensio and Dani Ceballos have less than a year remaining on their Real Madrid contracts, but Carlo Ancelotti hopes they will stay.

Now or never for Benzema with Ballon d'Or, but he has Mbappe's backing

Karim Benzema is the clear favourite for the 2022 Ballon d'Or, and Kylian Mbappe cannot imagine him coming up short.

De Ligt explains Juventus criticism, wants 'to get my Ajax game back'

Matthijs de Ligt thinks Bayern Munich will prove to be a better fit for him than Juventus were.

Jamie Bynoe-Gittens, 18, and Youssoufa Moukoko, 17, each came off the bench to score in Borussia Dortmund's comeback win at Freiburg.