Arteta's Arsenal 'culture' up for examination in Liverpool showdown

Arsenal were hammered 4-0 by Liverpool earlier this season, but Mikel Arteta's youthful side have the chance to gain revenge in the EFL Cup.

Mikel Arteta was unable to provide excuses on Sunday, after Arsenal crashed out of the FA Cup with a 1-0 defeat to Nottingham Forest.

"We are out of the competition and we have to apologise."

Arsenal have won the FA Cup a record 14 times, with their last triumph coming in Arteta's first half-season in charge. But while they will lament being on the end of a giant-killing, they have the chance to bounce back from only their second third-round exit in the past 26 seasons when they face Liverpool at Anfield on Thursday in the first leg of a semi-final in England's other major domestic cup competition.

Initially, the Anfield fixture of this EFL Cup tie was due to be played second but Liverpool's coronavirus crisis, which Jurgen Klopp revealed was ultimately down to several false-positives within the squad, led to the postponement of the first leg at Emirates Stadium, originally set to be played on January 6.

2 - Arsenal have been eliminated in the third round of the FA Cup for only the second time across the last 26 seasons, with the other instance also coming away to Nottingham Forest (2017-18). Merry. #EmiratesFACup

The Gunners lost 4-0 at the home of the Reds in November's Premier League meeting, as Arteta's men were dealt a harsh dose of reality after a 10-match unbeaten run across all competitions.

A further 10 games have passed since then, with Arsenal losing four and winning six.

With Pierre-Emerick Aubameyang having been stripped of the captaincy and ostracised before travelling away for the Africa Cup of Nations, Arteta has once again turned mostly to youth as he looks to continue to grow a new "culture" at Arsenal, who sit fourth in the league.

Claiming some measure of revenge at Anfield could just prove Arteta's plan is the solution for long-term success, and four players seem crucial to that blueprint.

Aubameyang's omission for a breach of club rules brought unnecessary noise in December, though results were not immediately impacted. With the 32-year-old not playing since December 6, Alexandre Lacazette has stepped in to spearhead Arsenal's attack, but behind him Arteta has an abundance of talent to choose from.

Emile Smith Rowe started the season brilliantly, though has only started one league game since November. That has not stopped the 21-year-old from being effective, however, with three of his eight league goals this season coming from the bench in recent wins over West Ham, Leeds United and Norwich City.

Smith Rowe has only played 63 league minutes since featuring for 70 in the December 2 loss to Manchester United, meaning he averages a goal every 21 minutes in that period.

Asked about Smith Rowe's game time before the defeat to Forest, which the midfielder missed altogether, Arteta explained he had been carrying an injury, one which also means he is a doubt for Thursday's clash.

"The only reason that changed the dynamic was that [injury], and obviously now there are others who are doing well and have been performing well. That changed the situation, but I am very happy with him," Arteta told reporters, before adding that competition for places can only be positive.

"This is why we need that, we raise the level. Each player raises the level of the player next to him, and this is how you evolve as a team, how you create a culture around the team."

Few could say Smith Rowe isn't embracing that "culture", with his recent hot streak off the bench reflecting a commendable attitude. 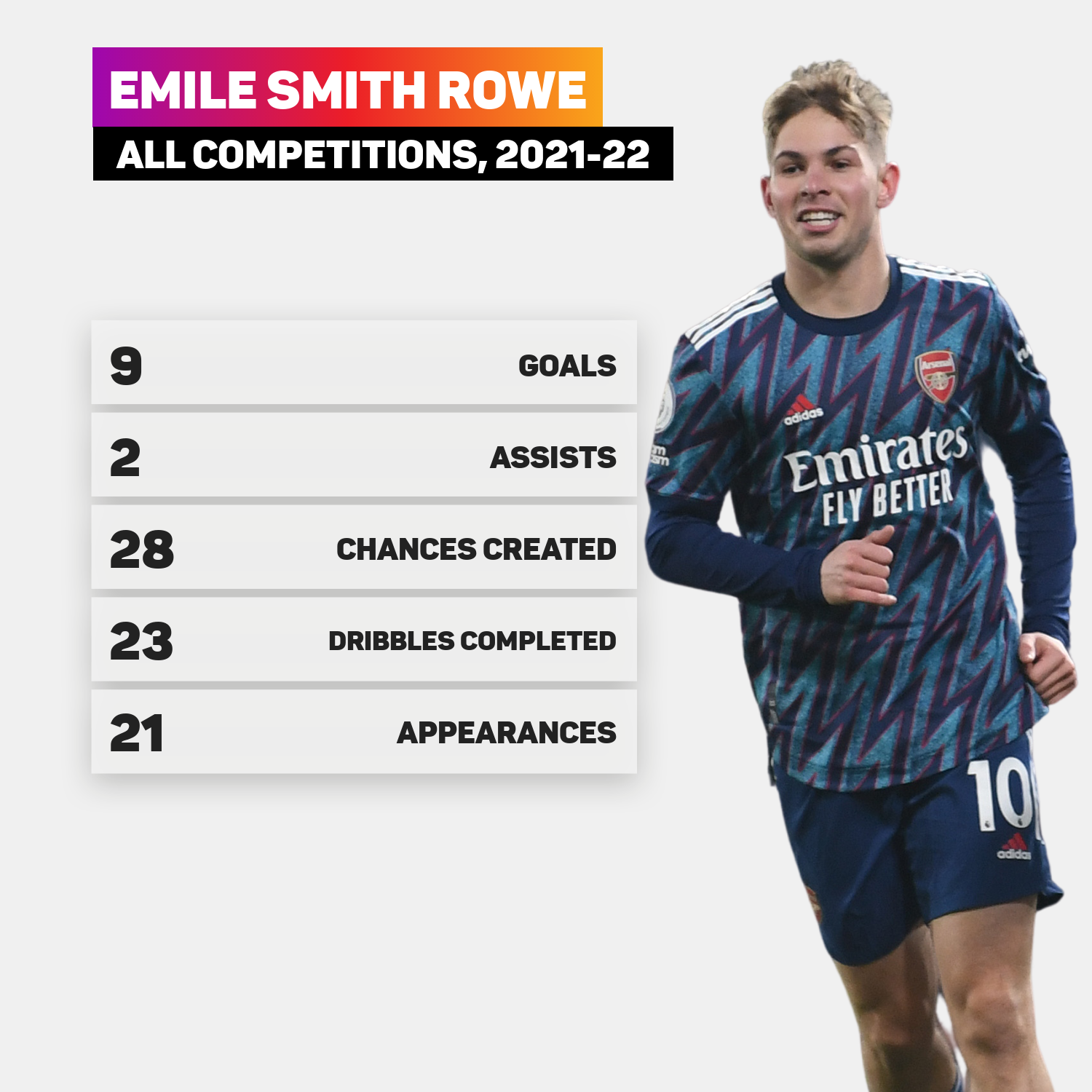 One of the "others" Arteta was referring to will surely be Martin Odegaard, who signed permanently from Real Madrid following a bright loan spell last season. Given the Norway international burst onto the scene at the age of 15 in 2014, becoming the youngest footballer ever to play in his homeland's top tier, it would be easy to forget he has only just turned 23.

Only Bukayo Saka (38) has created more chances than Odegaard (34) in Arsenal's squad in all competitions this season, with the midfielder topping that metric per 90 minutes when it comes to players to have featured over two times, producing 2.1 opportunities on average.

His eight direct goal contributions ranks him fifth in the squad while his shot conversion rate of 18.2 is good for a midfielder. Indeed, only the outstanding Smith Rowe, who has converted 32.1 per cent (nine goals) of his 28 attempts can boast better among Arsenal's midfield contingent.

Yet with Smith Rowe's recent spell as an impact player, Odegaard has started behind the striker in Arsenal's 4-2-3-1, his eye for a pass and knack of finding space on the edge of the area a key facet to some slick attacking play.

That playmaking ability was on show in the 5-0 thrashing of Norwich on Boxing Day, with Odegaard providing the assists for Arsenal's opening two goals and a key role in their final strike.

While Odegaard (33) has had fewer touches in the opposition box than left-back Nuno Tavares (35) and completed just 10 dribbles compared to Smith Rowe's 23 and the team-leading Saka's 27, no Arsenal player has attempted more passes in the opposition half than Odegaard (523), with 80.9 per cent (423) proving successful.

Odegaard's ability to keep Arsenal in possession with neat and incisive passing has been crucial for the Gunners. Indeed, only centre-backs Ben White (933) and Gabriel Magalhaes (822) have found a team-mate on more occasions than the playmaker (703). 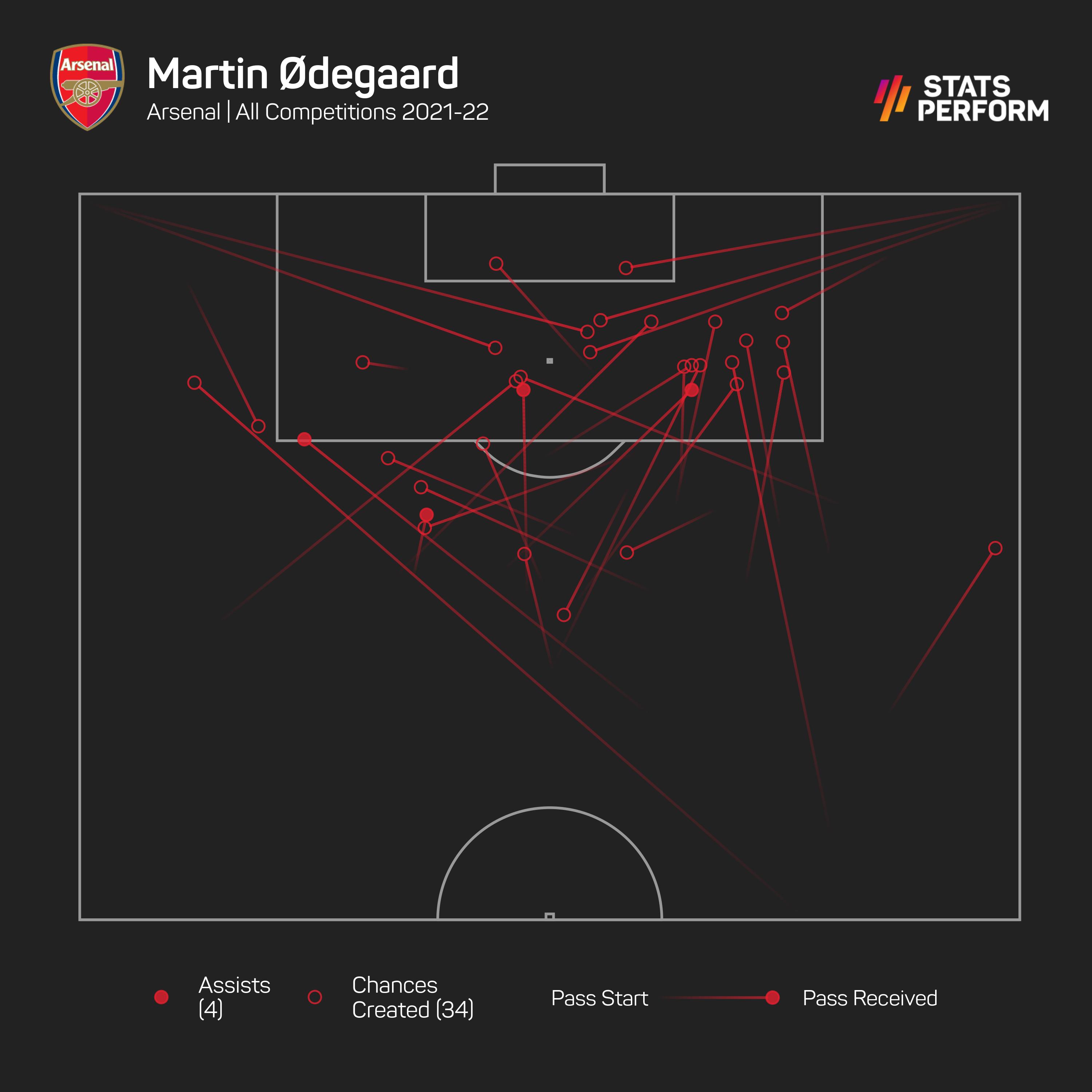 Flanking Odegaard (or Smith Rowe), Saka and Gabriel Martinelli both head to Anfield in superb form. While Saka scored the opener in the 2-1 defeat to City on New Year's Day, Martinelli has directly contributed to six goals from 18 appearances.

Martinelli's devastating turn of pace was on show in a 4-1 rout of Leeds United last month, though the Brazilian flyer missed a golden chance to put Arsenal back in front in their defeat to City, slicing wide of an open goal – if we're being generous, perhaps he was put off by the referee. Still, he should have scored.

Nevertheless, his four goals have come from an xG value of 4.2, putting him just about on par based on the quality of chances he has been provided with, though that is in contrast to Saka.

The England winger's tally of seven goals is second only to Smith Rowe (nine), yet they have come from 4.6 xG, suggesting the 20-year-old is finishing chances the average player wouldn't ordinarily be expected to convert.

For example, his swept effort low into the corner against City was only the seventh-best chance of the game, while a wonderful solo strike at Norwich (his second goal of the game) registered an xG of just 0.03 – essentially, this translates to a three per cent likelihood of scoring.

Saka also leads the way for big chances created (defined by Opta as an opportunity from which a player would reasonably be expected to score) with eight, three more than any of his club-mates, and only Nicolas Pepe has provided more assists (five to four).

Not only is Saka already a proven creator of opportunities, but he is now putting them away with unerring accuracy.

Arsenal were dealt a harsh lesson on their last visit to Anfield, but with a second leg at home to look forward to and with Liverpool missing key duo Mohamed Salah and Sadio Mane, Thursday could see Arteta's counter-attacking youngsters thrive, with a north London derby against Tottenham up after that.

Even if it again proves a step too far, there's no doubt the future is bright.

The Premier League has changed the threshold allowing teams to ask for games to be called off if they have coronavirus cases in their squad.

Reports claiming Newcastle have struck a deal with Lyon for Bruno Guimaraes are premature, insist the French club.

Sadio Mane sustained a blow to the head in Senegal's game against Cape Verde, but stayed on to score the opening goal.

Martial opens up on Man Utd exit: 'It's not about money, I chose Sevilla to enjoy football again'

Sevilla signed Anthony Martial on loan from Manchester United, with the forward making "economic sacrifices" to get the deal done.

Wednesday marks the one-year anniversary of Thomas Tuchel's arrival at Chelsea, and Stats Perform has reviewed the numbers of his 12 months.

Rumour Has It: Arsenal switch focus to Isak after Vlahovic chooses Juventus

With Dusan Vlahovic apparently no longer an option, Alexander Isak could be the man Arsenal turn to in their striker hunt.

Sadio Mane revealed he was taken to hospital after a clash of heads with Cape Verde's Vozinha, but the forward insisted that "all is well".