Midfielder Rodrigo De Paul believes Argentina are starting to "perform like the national team we are accustomed to" as they prepare for Saturday's World Cup last-16 showdown with Australia.

Argentina arrived in Qatar as one of the tournament favourites only to be the victims of a stunning upset in their opening game, going down 2-1 to Saudi Arabia.

Wins over Mexico and Poland have got their campaign back on track, and with a favourable draw ahead of them, De Paul was in bullish mood.

"You always learn from defeats and we found ourselves in a position that was unusual," he said. "But we have shown a lot of character and personality.

"We never changed what got us here. Sometimes it works well and sometimes it doesn't but in the second half against Mexico we began to see the national team we are accustomed to, and we showed that for the full 90 minute against Poland." 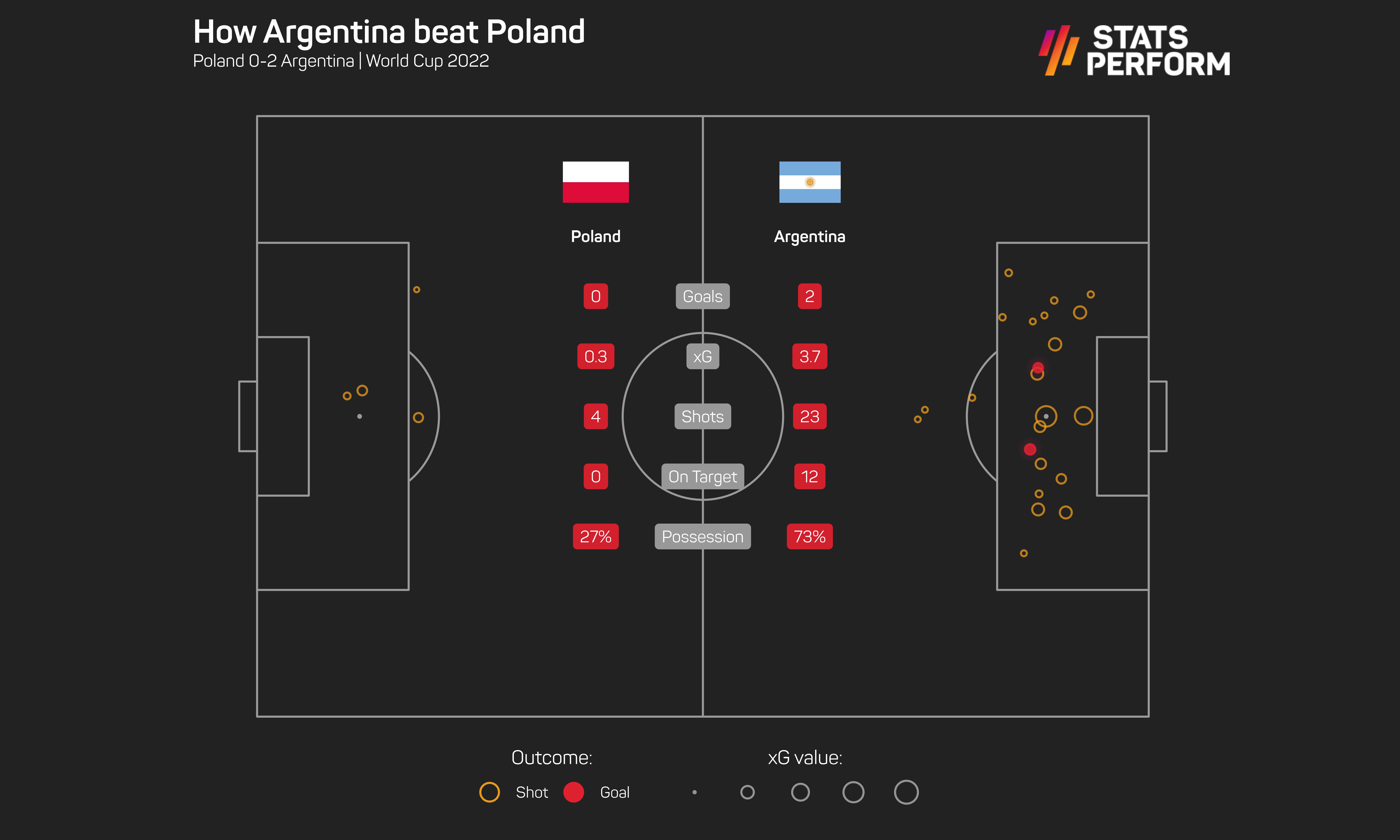 The Atletico Madrid man came in for criticism for his performance against the Saudis but says his love for the shirt is undimmed.

"I am proud to wear the shirt of Argentina and I love the country where I was born," he added.

"I will defend the shirt until I die and I will always give my all. Sometimes things go better or worse, but I will never hide. This is what brought me here."

After finishing their game against Poland approaching midnight local time on Wednesday, Argentina will be back in action on Saturday evening against the Socceroos, a turnaround coach Lionel Scaloni described as "not right".

And he may have to do without winger Angel Di Maria, who was substituted after 59 minutes against the Poles.

"He felt something in his quadriceps and we preferred to take him off," said Scaloni. "Everyone knows how important he is, it's not worth leaving a player on the pitch who could make an injury worse."

Argentina will go into the game as overwhelming favourites against an Australia side that defied expectations to emerge from a group that also contained France, Denmark and Tunisia.

Socceroos defender Bailey Wright cut an emotional figure following their 1-0 win over the Danes with his mother-in-law seriously ill at home.

"It means a lot, I want to dedicate this to my wife, for her mum. To be honest, I’m not sure if she’s still with us," he said through tears.

"It’s been a really tough time back home but ultimately they made it possible for me to be here and to live one of my dreams. So I dedicate that to her. I hope she’s still with us.

"It’s something I’ve kept to myself. We’ve all had a lot going on. [I've got a] job to do, got to be a professional all the time."

Sunderland defender Wright came on in the 74th minute to make his World Cup debut and was tasked with helping preserve a narrow lead provided by Mathew Leckie's left-footed strike on the hour mark.

"I knew Arnie [coach Graham Arnold] had in the back of his mind that he was potentially going to change things. It’s pretty special, it’s my second World Cup and to get on is special," he added.

"Achieving what we’ve achieved with that performance and the rewards you’re seeing now are for the efforts of the last four years.

"When we set out on this journey, Arnie said our togetherness would help us make history. The sacrifices staff and players have had to make, a lot of people wouldn’t have seen those – people isolating, being away from family for weeks, months.

"There’s a lot of people who aren’t here who have put that work in, but you’ve always felt the sense of togetherness, that your mate has got your back, it’s 11 brothers out there, whoever comes on. It’s pretty special to be part of that. It’s hard to put into words, it’s a real feeling."

Brighton playmaker Mac Allister was named man of the match in the win over Poland, primarily for his opening goal which settled Argentinian nerves.

Having not started the opening game against Saudi Arabia, Mac Allister has played the last two and has profited from the space created by teams focusing their efforts on stopping Lionel Messi. 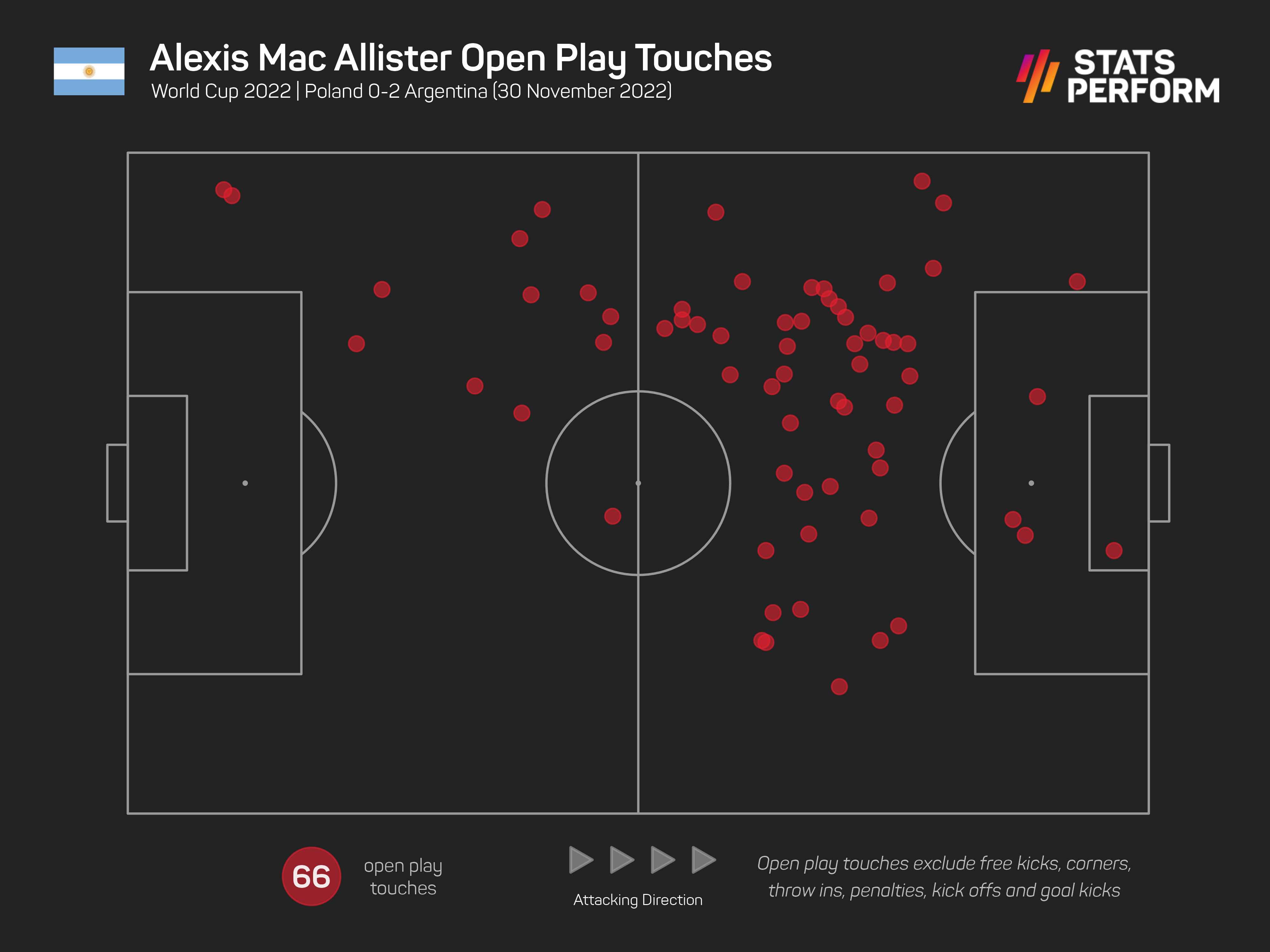 Leckie scored his 14th goal for Australia in all competitions (first at the World Cup) against Denmark. His importance is demonstrated by the fact that's at least five more than any other player in the squad.

Argentina's gradual improvement since their shocking second-half display against Saudi Arabia means they are finally performing like one of the pre-tournament favourites. Australia are hard-working, honest and determined but it's virtually impossible to think the Socceroos' journey won't end on Saturday.