AFCON 2021: Kamaldeen, Hannibal and the young talents looking to impress

With the Africa Cup of Nations starting this weekend, Stats Perform looks at some of the younger players out to impress.

We may only be a week into 2022, but the first major international football tournament of the year is on the horizon, with the Africa Cup of Nations kicking off on Sunday.

It's been a long time coming as well – it was initially due to take place in June and July 2021 but was brought forward to January 2021 due to concerns about the weather. It then had to be pushed back a year due to the coronavirus pandemic.

Of course, fans and teams have had to put up with the usual posturing from those at certain clubs regarding the inconvenience of relinquishing players in the middle of the season, but despite that there remains a healthy selection of big names.

In fact, given the standard the likes of Mohamed Salah, Sadio Mane, Riyad Mahrez and Achraf Hakimi usually play at, some might even argue this is one of the highest-quality groups of players to feature at a single AFCON.

But the beauty of every international tournament is that there's more to them than the big names – there are plenty of promising younger players looking to impress for a global audience.

Hold on to your seats! Kamaldeen is sure to ramp up the excitement at AFCON, such is his rather chaotic approach to attacking – and acrobatic celebration. The teenage winger is immensely tricky and agile, with his 246 take-on attempts in the 2020-21 Danish Superliga nearly twice as many as anyone else – to put that into context, only Lionel Messi managed more (261) in the top five leagues. He's carried that into Ligue 1 following his move to Rennes, with his average of one shot involvements from a ball carry every 43 minutes being the second best in Ligue 1 (min. 900 minutes played) after Kylian Mbappe – that's obviously pretty good. 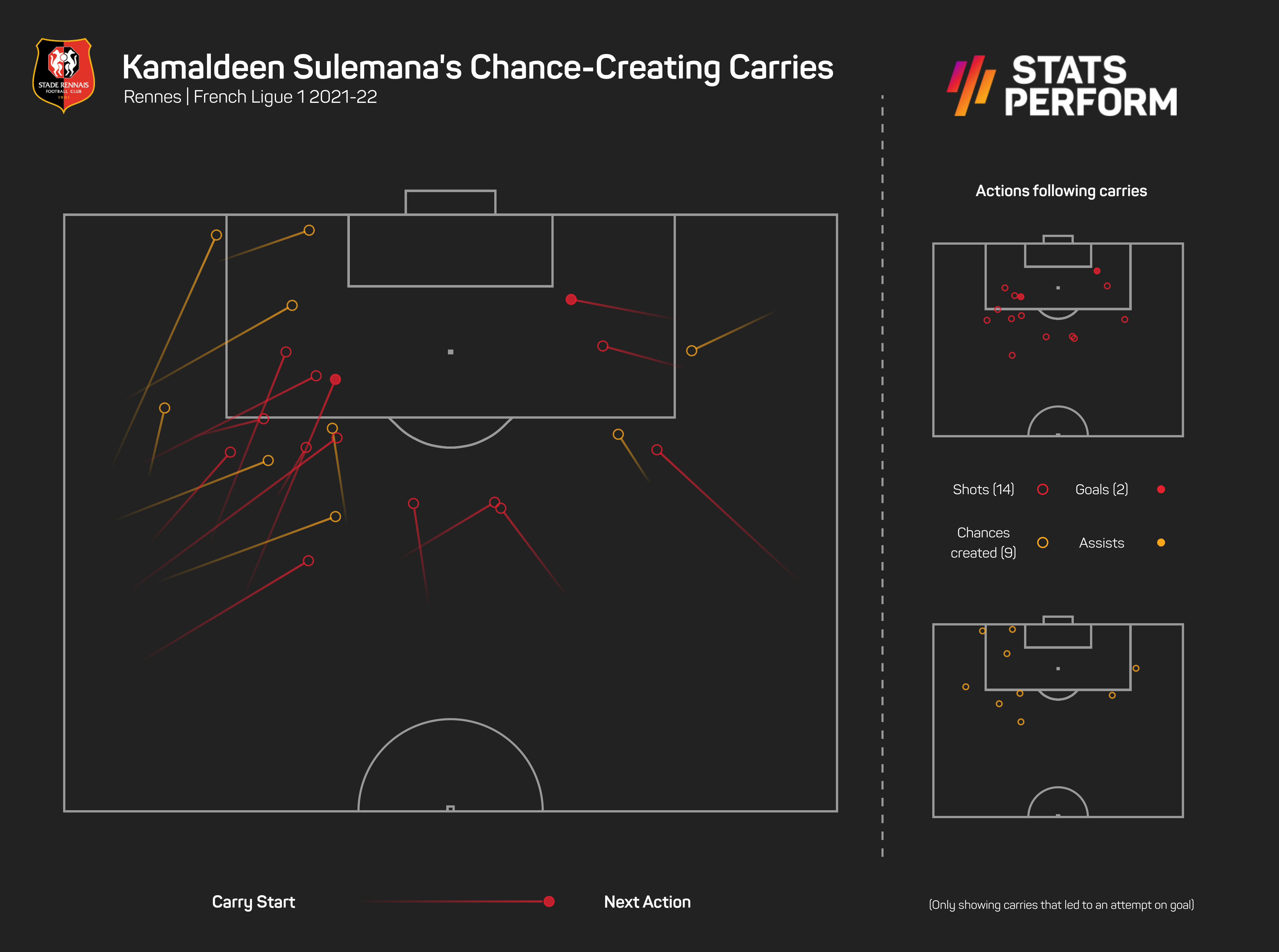 While good performances at AFCON alone may not be enough for players to convince big clubs they're worth a punt on, showing promise might just get a few more eyes on them. Sangare is definitely one of those who could put himself 'in the shop window'. The PSV midfielder has a lot about him, particularly when it comes to defending. In this season's Eredivisie, only three players (at least 500 minutes played) have averaged more than his 3.4 tackles per 90 minutes, while he ranks fifth for interceptions frequency (2.5) and third for middle-third recoveries (5.7). He's also technically proficient and happy on the ball, with only three players attempting more passes (81.1) on a per-90-minute basis than him.

A former France youth international, Mejbri may have only declared for Tunisia in 2021 but this will already be his second international tournament. The Manchester United midfielder started all six of Tunisia's games as they reached the final of the Arab Cup in December, eventually losing to Algeria in the final. Hannibal may not feature quite as prominently in a full-strength squad, but the midfielder possesses the kind of off-the-cuff abilities that endear him to fans – if not opponents. He is known to be targeted for fouls when playing for United's second team, such is his natural talent.

2021-22 hasn't quite gone as Moriba presumably thought it would. He left Barcelona after failing to agree a new contract, despite having broken into the first-team setup at Camp Nou. The midfielder had shown exceptional promise, particularly on the ball – he averaged 3.2 dribbles per 90 minutes, a total bettered by only four team-mates, and boasted a success rate of 89.3 per cent, with only Miralem Pjanic bettering him. The €16million signing has played just twice in the Bundesliga since the move to Leipzig and will surely be relishing some competitive action.

If Burkina Faso go on to have a good tournament, Tapsoba will almost certainly have had something to do with it. The centre-back is an extremely elegant player for someone roughly the size of a small building and whose name sounds like a hipster bar, and at club level he performs a vital function in getting Leverkusen on the front foot, with his 13.5 progressive ball carries in the Bundesliga this term second only to Alphonso Davies. If he can translate that to the international stage, Burkina Faso will have a real weapon in the middle – even if he doesn't, he'll still give them aerial threat at set-pieces. 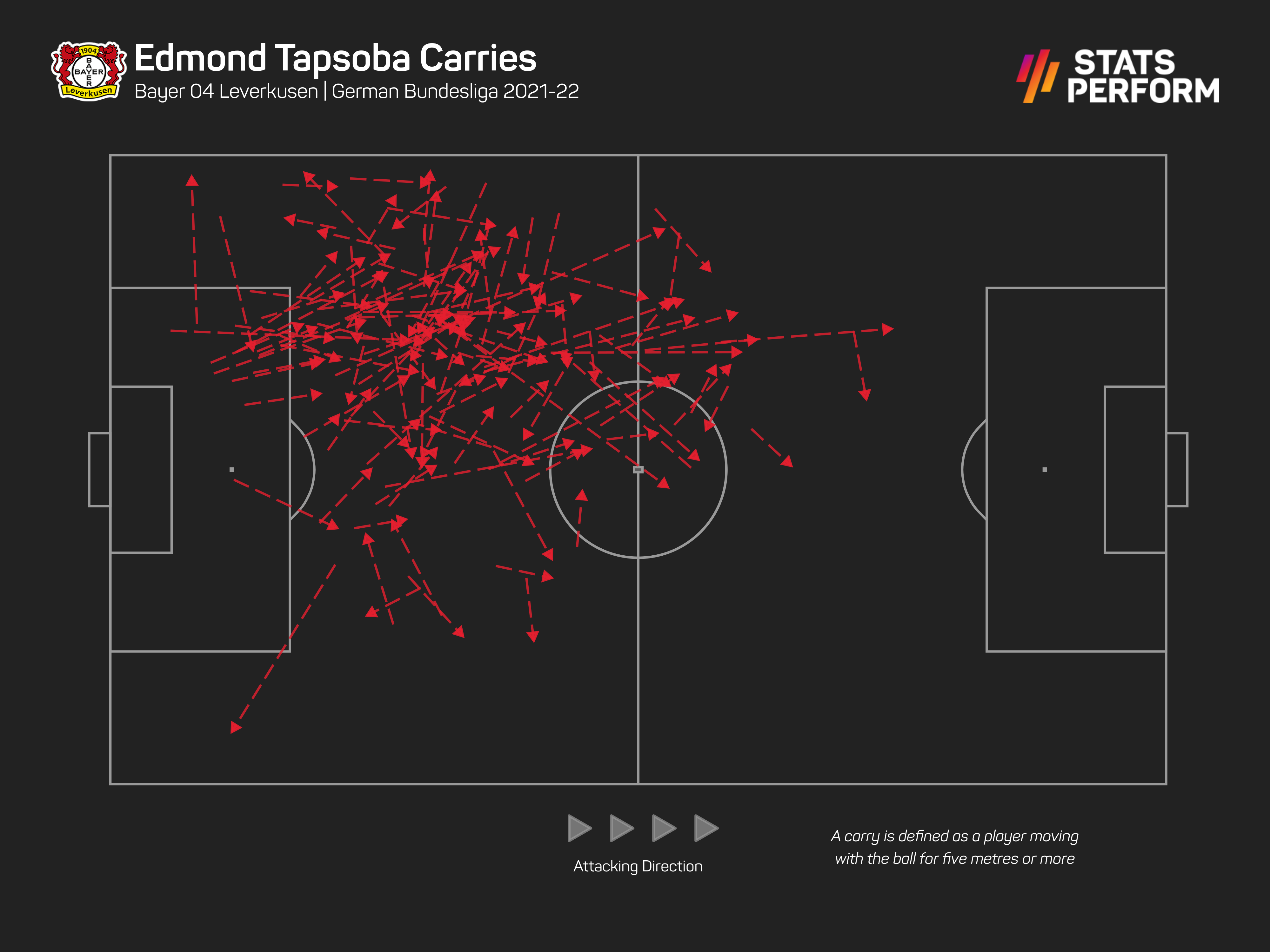 The case of Issahaku is a rather intriguing one. Transfer rumours in 2021 suggested Liverpool had signed him for £1.5million, but that soon turned out to be false. He remains in his native Ghana, but the exciting attacker has seemingly done enough to earn a shot at international level despite being just 17 – he's the second-youngest player at the tournament. But he's used to that sort of situation. After all, before he'd even turned 17 in March he was named Player of the Tournament at the Under-20 Africa Cup of Nations. While that Liverpool move never materialised, he's got himself another opportunity to shine.

With Ansu Fati looking set for another prolonged absence, the teenager reflected on what is proving to be a difficult start to his career.

Stats Perform dives into some of the Opta numbers from Saturday's Premier League action, with Manchester City slipping up at Southampton.